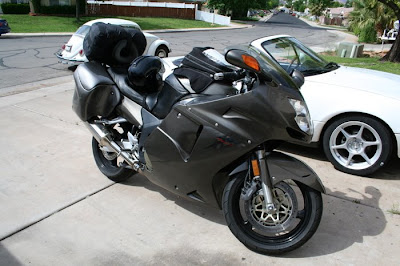 Last year's ride taught me that I'd be better off with a throttle lock. Tried a number of market items, none of which worked as promised. In prep for this trip I picked up a Throttlemeister. Did a Vegas trip and it wasn't long before I forgot how much I paid for it.

Also completed the list of goods for the trip and did a test pack and ride. While the Corbin Beetlebags aren't conducive to luggage, if you pack outside the box, so to speak, they'll hold a lot.

The black compression bag lashed to the backrest holds the three-person tent, two sleeping bags, two pillows and three air mattresses. Mindy will port clothes and ride gear for her and Katie and the third sleeping bag. 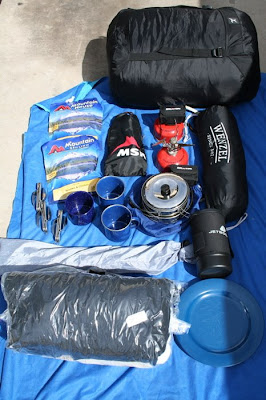 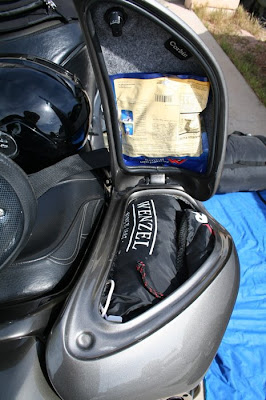 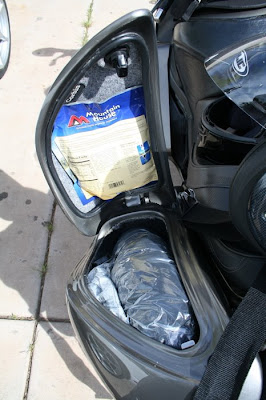 L side - four days of clothing packed in a Space Bag. 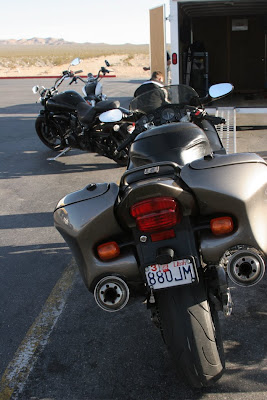 Last year my rear Power Pilot disintegrated along the grooved cement south of Las Vegas - ripped it down to the cords. A stop at Primm and inspection revealed the damage. 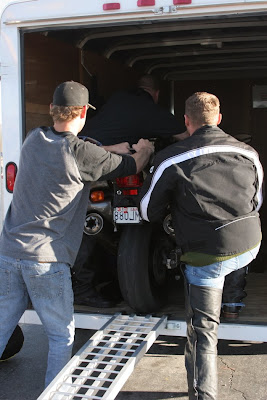 We loaded the 'Bird onto the grip trailer and u-turned it back to Vegas to Carter's and three hours later found the 'Bird with a new set.

There's 9,000 miles on them now, making me a little squirrelly. We won't have the luxury of a support vehicle. Chicken strips and wear indicators close to the surface... looks like I'll be springing for new skins.

Installed new brake pads all around and fresh oil and filter.