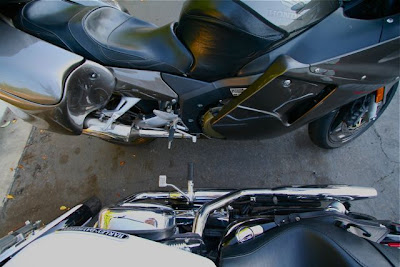 It's a journey of stark contrasts; 50's on the coast, 100's in the foothills, twisties on 1 and 58, mind-numbing straights everywhere else, a Honda and a Harley, and the Cavalier at San Simeon and Motel 6 in Bakersfield. But, what's a road trip without it. 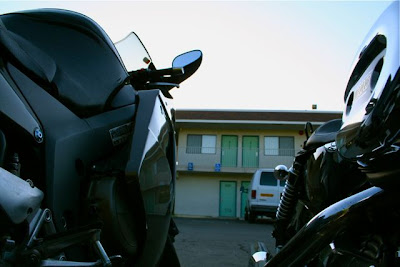 We drew comments at about every stop today. At McDonald's in Bakersfield another patron asked about our trip (we're pretty obvious in all the gear) and then talked about his yearly tour of the western states. In Barstow a little ol' lady in an old red VW went on about her daughter (who was standing there filling the Bug) rides a Harley and how her son-in-law was wiped out by a semi in Laughlin last year - stories we never like to hear. In Vegas, "Didn't I see you ladies northbound I-15?" He quit talking when I showed up.

There was no one around at the Mojave Air and Space Port where we stopped for a photo, save one guy who was hauling huge pumps on a forklift who advised us to park in a safer spot since one of those rolled off the forks the other day. Agreed. 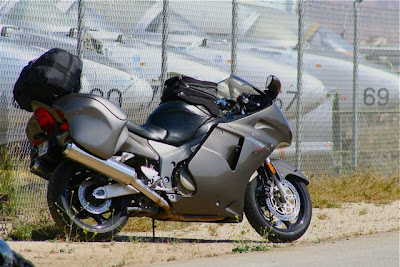 The conversation at every stop had to do with relocating to California. So we talked about advantages to staying in St. George. We took our family and friends out of the picture because that's a gimme, and really, it all boiled down to the spot where we decided to officially end the trip: 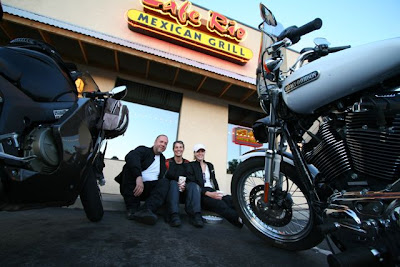