Speak the names of most small towns in Utah and you can immediately fetter out who's a native and who isn't, especially when you say the words, "Tabiona" or "Hannah." These neighboring villas are nestled along the Duchesne River at the base of the High Uintah Mountains, and host the annual gatherings of the Moons and the Fabrizios, families indigenous to this area, along with the Defas.

The Fabrizio name came across the Atlantic from Italy with a "De" in front of it and was later divided into two, though I'm not sure where that happened, and those families established the history around Hanna and Tabiona. You'd think there'd be strong Italian traditions that survived the emigration, but it seems the Uintahs would have none of that. Instead, what evolved were a work ethic honed by the rugged territory, foods adapted from available resources, and values rooted in old world ideas elevated to reflect new religious influences. What didn't survive was the language, all of this to make a remarkably unique micro culture and a family reunion on the cusp of losing even these traditions on the next generation.

This is our third year attending and we've made a camping trip out of it, being that the reunion is held at the Fabrizio's Over the Hill Camp Ground on the Duchesne River. This year we went up a day early to try out our new camping kit, and trek up into the High Uintahs where I shot a documentary about a decade previous.

We've traded out the roof top tent with something more pragmatic and comfortable. Navigating the ladder out of the RTT for the 2:00a pee was perilous at best, challenging even the best bladder control, not to mention getting arthritic limbs to move in ways best left to primates. 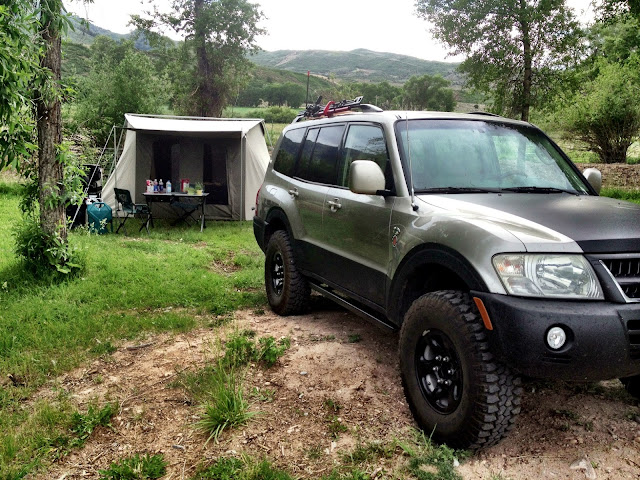 We replaced the RTT with a spring bar Kodiak Canvas tent, a ten by fourteen palace giving us ample room for upgraded sleeping arrangements and the ability to stand and walk around as was intended for most the homo erectus species. 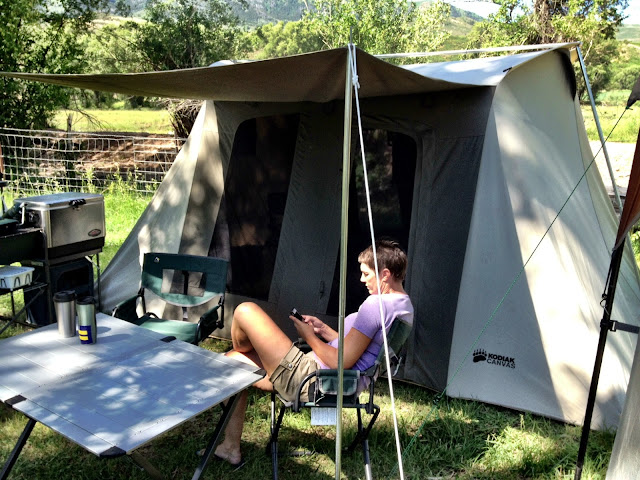 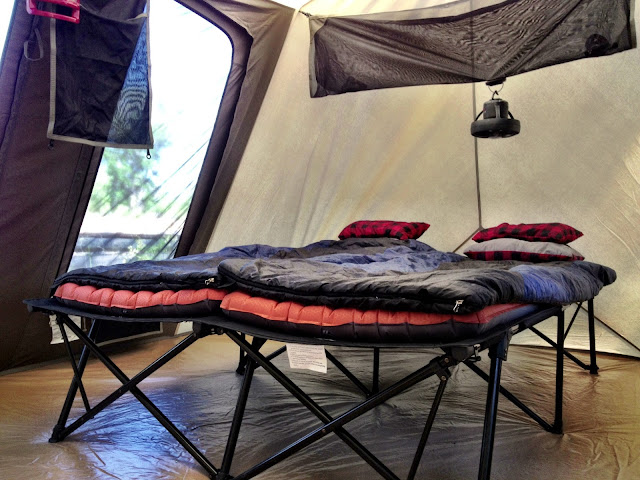 Now that we're traveling and camping with two medium-sized canines, this space accommodates them well and gives us a place to go in when the weather turns wet. 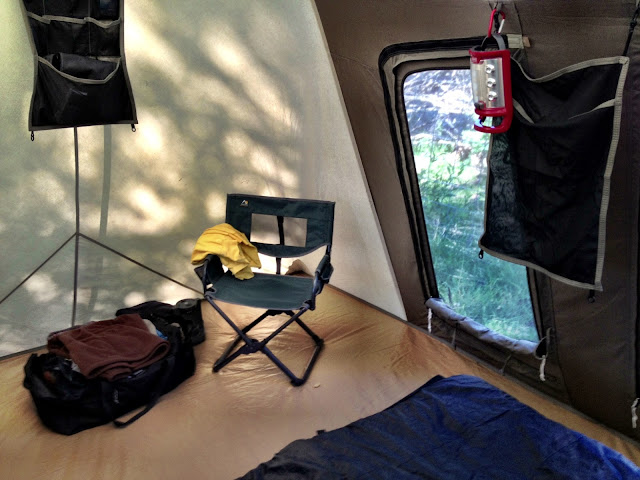 The spring bar design deploys in a few moments and the canvas will make this the last tent we ever buy.

Another upgrade for us was the double cot and the Exped down-filled mattresses. 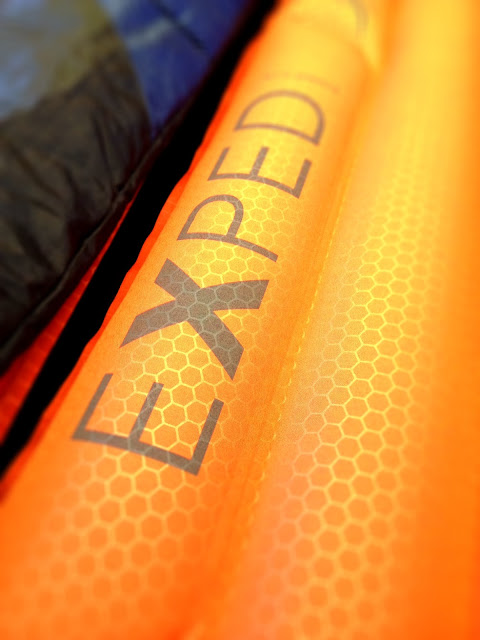 While the RTT was cozy and comfortable, these made you think you could also order room service.

With our camp established we headed up the mountain to a place I had been before under much different auspices, shooting a documentary about a youth program for troubled boys. We headed into the Ashley National Forest, climbing to ten thousand feet to Lake Basin and Rock Creek. 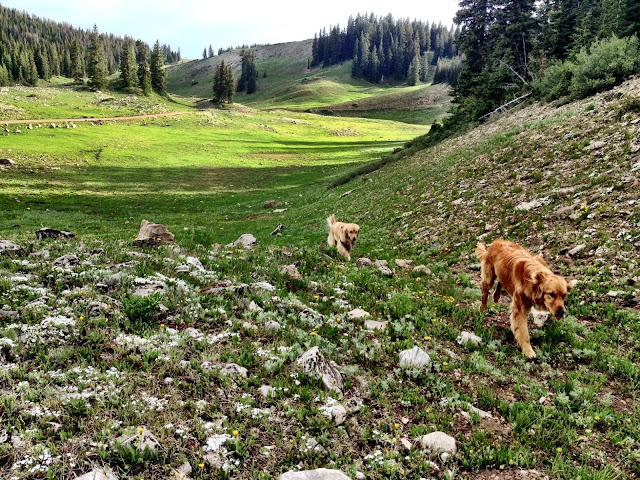 The boys would spend a couple of nights camping alone spread out within this basin. Ginger and Mary Ann loved it there, as did we, cooling off from the triple digits in the valleys below.

We mounted the road that can be seen in the photo above and then turned left going over the rise in the middle of the pic. We traversed a meadow there and climbed up to this view. 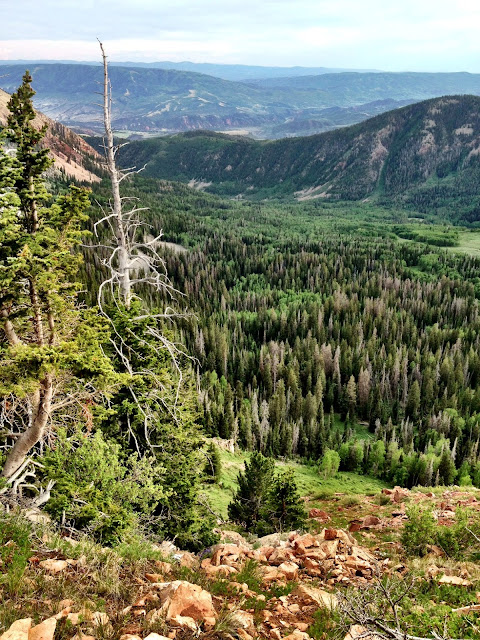 At last year's reunion a certain Grandpa Fabrizio took a family rise to the same spot on four wheelers. They stopped here to admire the view, except the brake on Grandpa's rig wasn't set. The four wheeler was stopped mid air by a tree to the left of this photo where it lodged, vertically. 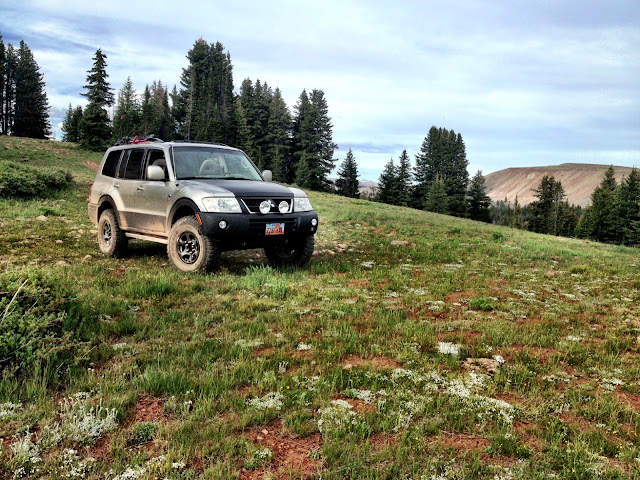 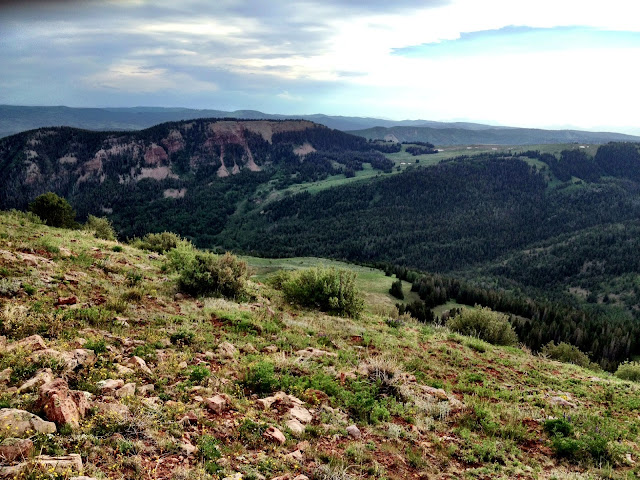 We made it back to Over the Hill and enjoyed the evening, spending Saturday with the Moon reunion and Sunday with the Fabrizios.

We took the long way home, going over Huntington Canyon to show Mindy the remnants of the Seeley fire there, and then on to Highway 12 over Boulder Mountain to Escalante and home to St. George, a ten hour trip.
Ashley National Forest High Uintahs

This trip was scrubbed two weeks ago when it was originally scheduled due to the unplanned surgery reattaching my left biceps tendon. So it's with great relief to get to a point where we could make this little overland trek in a minimum of pain.

As with any adventure that takes us east out of St. George, this Grand Staircase trek took us through Zion Canyon.
The idea was to drive to Escalante, Utah, where the trailhead to the Smoky Mountain Road can be found down a side street not far from the BLM offices on the south side of town.

We're always glad to get back on the road or back on the water, to move, explore, share, talk, eat, sleep and drink in the proximity of each other.
Mindy was able to get off work earlier than expected giving us a head start and putting us in Escalante a couple of hours ahead of time. The plan was to camp at Escalante Outfitters, a barely-an-acre parcel set up for tents, not RTTs. So we camped in the parking lot, fully warned that a wedding party wa…
Read more

My sisters used to play guitar and sing Peter, Paul and Mary's 500 Miles, a folk song that would haunt my earliest dreams as a four year-old kid. The memory of the dream is still pretty vivid; I'm on a road walking west to the horizon and it's getting dark. The feeling is even more vivid, a combination of fear and purpose.

Throw in the Mamas & The Papas' California Dreaming and the sum for me is the reason I'm still drawn to the West Coast. That, and being land-locked in the Southwest. If you've been reading this blog you'll know we've been making the best of that as well. Mindy's always been patient and tolerant enough to go along for the ride.

A trip we've been planning to Eugene to pick up our daughter from Duckland for a break turned into a trek up the northern extension of the Pacific Coast Highway; the Shoreline Highway, the Redwood Highway and the Oregon Coast Highway, that curvy undulating ribbon of black that forces all your senses…
Read more