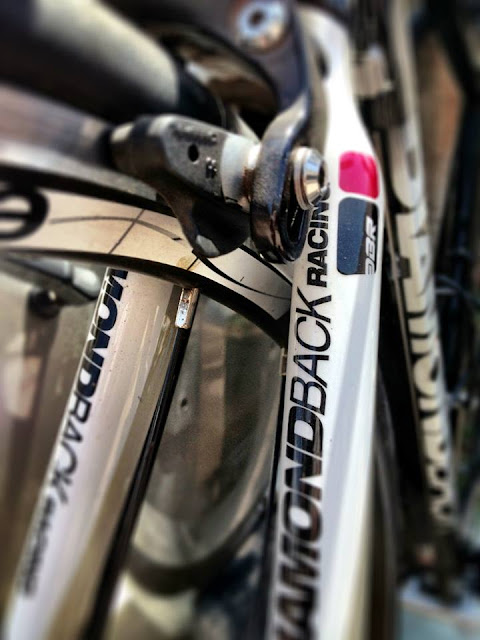 It's an ambling of a different nature for us, or at least for me, one that doesn't involve internal combustion, but rather internal determination. Mindy's been at this for three years now, and I just picked up my bike, let's see, more than a year ago. But, I'm putting more miles on it finally, fifty three of which were added this weekend at the Desperado Dual, a "tour" from Panguitch to the Bryce Canyon area and back to Panguitch.

My idea of a workout is swapping out the ATs for the mudders on the Montero. I've never been much for endurance sports though producing documentaries about professional cycling in the nineties stoked my enthusiasm for all things bi-pedal with wheels, especially the Tour types, and it's been the Tour de France this year along with Mindy that's given me the motivation to get on the road. Go Team Sky. We're talking about signing up for our next race as I write this, the Gran Fondo in San Luis Obispo, California in October.

She rides a Trek 2.1 Alpha and I a DiamondBack Podium One, my first serious road bike, and what I mean by serious is that I have to wear clip-ons to ride it.

We packed up Friday and got to Panguitch in time to check-in to our accommodations and get used to the altitude. As if.

We stayed at the Canyon Lodge, a recently acquired, family-run motel with quaint Panguitch undertones, like a knit cover for the spare toilet paper roll.

We wrenched the bikes, getting things set for the morning. Race time at 7:00a with a rider meeting at 6:45a.

With everything tweaked and lubed we hit the town for some pre-race carbs. There are basically two choices in Panguitch, the Flying M Cafe or the Cowboy's Smokehouse Cafe. I'm sure they meant for the possessive to be the plural of Cowboy.

Great brisket, good ribs, and avoid the chicken. I know, these are all proteins. The carbs were in their remarkable bread pudding.

Got a pic with the Duke after dinner.

Mindy finally found someone with a smaller head than her own. Who'd have thought it would be John Wayne?

We strolled around town looking for the social hall where we were told we could find the event organizers and pick up our packets for the morning. What wasn't communicated was that the organizers had moved to the Garfield County Fair building, where the race would start the next morning. This is good to know. 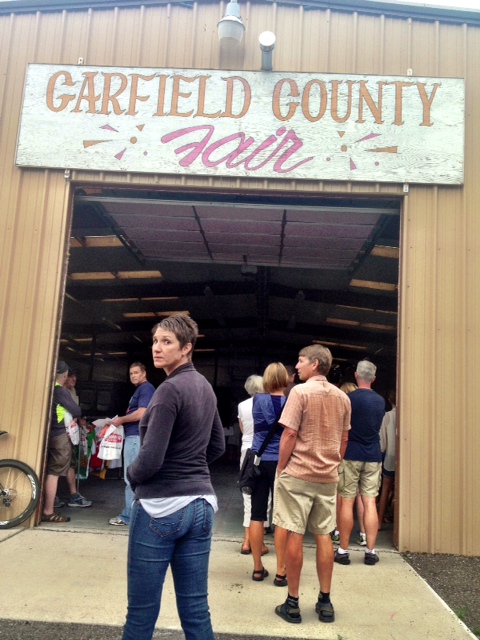 This '68 VW flatbed matched my new deck shoes. You find the coolest cars in rural Utah.

Except for the Montero's alarm going off in the middle of the night and a 2:00a text from a well-wisher, we got some sleep in the Canyon Lodge, rose early to prepare for the race and rode our bikes to the start line at the fairgrounds.

Two hundred fifty riders in all racing in categories from 50, 109, 185 to 218 miles. It's touted as one of Utah's flattest races, at least that's how Mindy convinced me to enter, with an elevation gain of a thousand feet. We train with 1200 ft. gains so no big deal. Unless your data is corrupt. Our 53 mile portion of the Desperado had a 4,360 ft. gain, all of which is in the first 18 miles. Had we known this we wouldn't have looked this calm.

It's a beautiful ride, and once the first 18 miles are behind, the views can be enjoyed a little more freely.

There's an aid station/refuel point at the 25 mile point where we got some electrolytes and carbs for the descent back to Panguitch.

For the first time ever I began to understand the runners' high phenomenon and as we made it down the last hill on Highway 89 back into Panguitch riding together, the accomplishment was a great feeling, even at 50 miles. We did it in 3:53:24.

Once across the line we checked the data on the ride on MapMyRide. 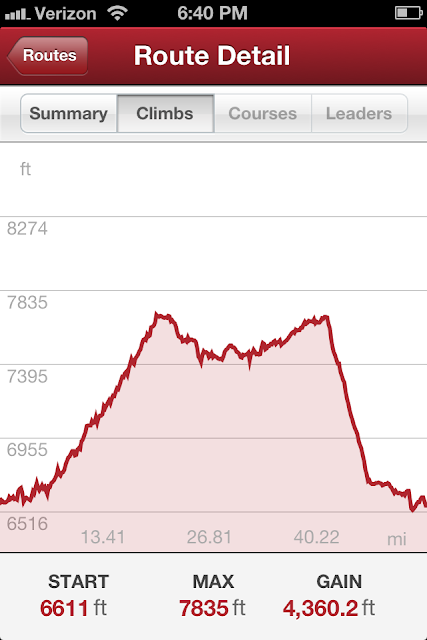 Yeah, that's more like it. A thousand feet my ass.

We had a great time and are looking forward to the next one.