The MT Serenade in Moab 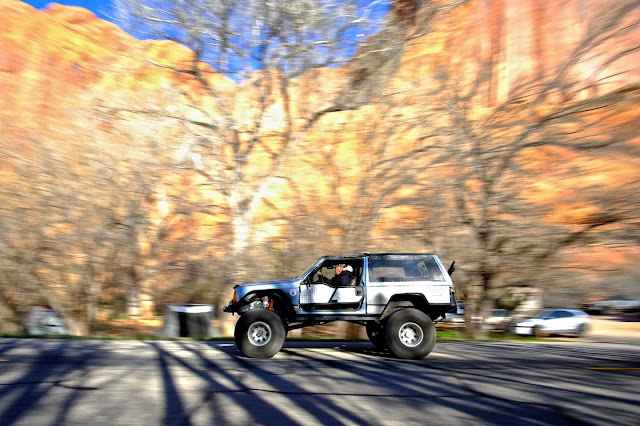 Showing up in Moab at the start of the Jeep Jamboree in a Hummer H3 is excruciatingly similar to showing up at a Harley Rally with a Blackbird. Reconnecting with an old friend was the inspiration behind this trip, along with the potential to explore the iconic tracks of the area, but they were all closed unless you happened to be part of the Jamboree. We were not. And that was probably a good thing.

We slabbed to Moab on a Friday and were duly awed by the last quarter of the trip, that part of I-70 that cuts through the seemingly uninundated parts of the La Sal National Forrest area and the tip of the San Rafael Swell. We'll be back to explore their vacant backroads.

We were disturbed a bit though, not by the beautiful vistas, but by the H3 that would slam in and out of neutral whenever I opened the throttle at freeway speeds.

The slamming subsided along 191 as we made the descent into Moab. Camping along the Colorado was the appeal for us, so we took 128 east and wound our way along the great river only to find no vacancies at any of the its campsites at 6:30 in the evening. No surprises, but we've been lucky before. We ended up in an overflow campsite at the Big Bend campground and setup during sundown.

Campground fees are a reasonable $15, unless all you have in cash are twenties. We thought we'd stay two nights, $30, easy enough, surely change could be made out of the wad of fees collected by the camp ground's host, a BLM employee. I watched him collect cash in various denominations from other campers, and when he came around to us I asked if he could take two twenties and give us ten back. "I can't make change," he said. I bet. You got a good thing going on there. Everyone's desperate to get a site, supply and demand principles come into play, and he's making a killing.

Then we find out we can't camp two consecutive nights in the overflow. But, I can't let crap like this affect me and spoil the trip, so we settled into chili cheese dogs for dinner and a chilly, windy night for a little shut-eye, resolute to find a better spot in the morning.

Dawn breaks late in a canyon carved by the Colorado. I made coffee and warmed up in the Kodiak. 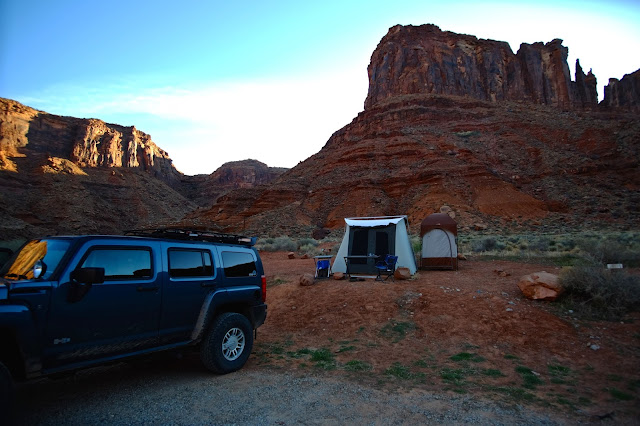 Campgrounds make the earth a smaller place. We're rarely more than two or three degrees of separation from someone we know and usually discover these connections in just a couple of questions. Such was the case when I discovered one of our neighboring campers from Illinois also works for a tech company out of Happy Valley that also employs one of my nephews.

Hummer packed, we made our way back into Moab, trolling each campground along the way, but to no avail. Mindy's friend sent a text with some alternatives, one being Jaycee Campground up Potash Road. Our timing was good and we secured a site large enough to hold our little reunion. That's our Kodiak in the top pic of this post. It's a small campsite with seven walk-in sites with a potential of quiet alongside the Colorado, but not, of course, during the Jamboree.

Site secured, we went back into Moab and had breakfast at Sweet Cravings and got Mindy installed for a bit with Wifi to do her graduate stuff while I went back to our site to set up camp.

Besides the ominous shifting of the H3, this was a trip of other failings of imperative gear; the coffee press of the JetBoil broke, and the Helio Pressure shower sprung a terminal leak, the two things I have trouble living without in civilization, let alone the wild.

I picked up Mindy a bit later and we made one last scramble in town for necessities, including a new press for the JetBoil which we found at the Universe's center of all things outside, Gearheads Outdoor Store. Were I a believer, this is what the first level of my heaven would look like. I'm going back to Moab just to visit this store again.

Back at camp I was surprised by a visit from an alum of my program and producer from my show along with her new spouse. She's a Moab native and her family runs an adventure company and she explained how her hometown goes from less than 8,000 to a stampede of Mud Terrain tires hauling in excess of 90,000 people for the weekend. We were serenaded evening, night and morning by 35" MTs shodding every kind of Jeep imaginable and a few beyond. 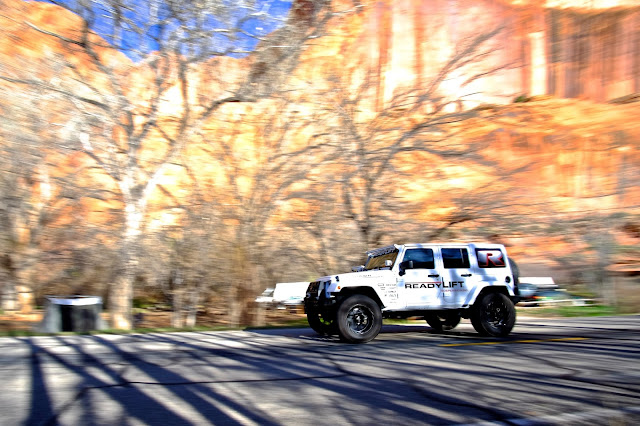 Such a display of rock crawling, overlanding hardware would have been greatly appreciated were that the purpose of our trip. But who am I kidding? I appreciated it nonetheless even as it interrupted great conversation with reunited friends around campfire. At least I can turn to Mindy and say about my own overlanding fetish with the H3 that I'm not as bad as those guys. Almost.

Sunday morning we bugged out in hopes to find a track or two, but that little reminder of the Hummer's transmission hiccups kept me from engaging anything off road. Instead, we picked up Highway 24 on a spur-of-moment detour to take us through Hanksville and Capitol Reef National Park. 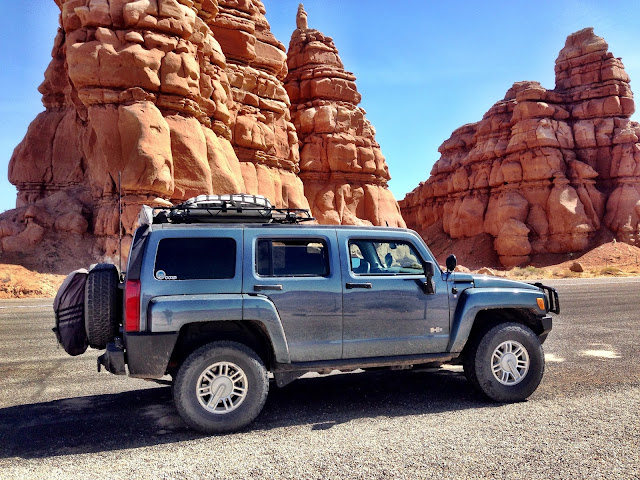 Yes, it's lame that all I got was this pic and the one below, but given the crush of humanity in the Canyonlands, some things are better left unpublished. 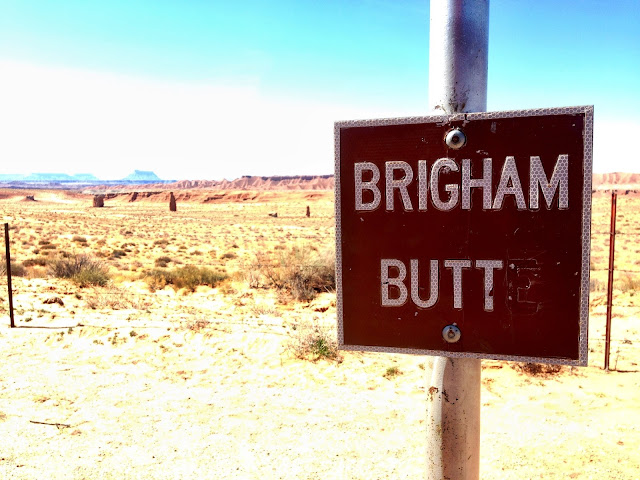 The detour added two hours to our retour, but it was well worth it. The H3's transmission failed the next day.

Post Script: In her defense, the H3 delivered us home safe once again with a terminal condition. The time before was when the transmission cooling lines broke on a return from Toroweap, no small feat. It's been hammered through all kinds of terrain, climbs and steep descents without stranding us, and at 150k miles on the clock, the transmission was ready to go.