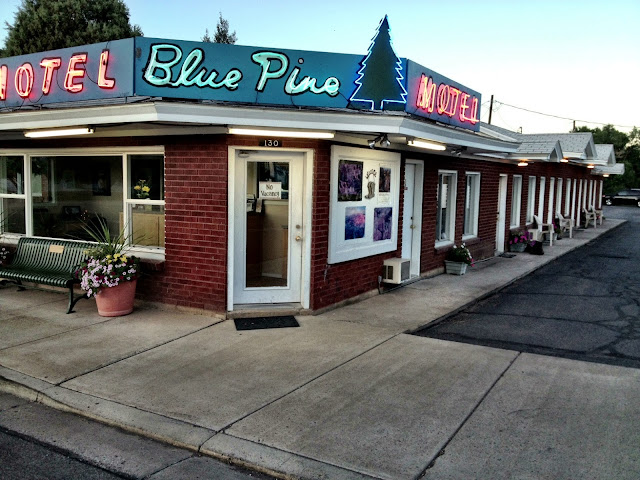 Moto-camping forces perspective, not so much as the optical illusion, but rather a consideration of what's important to bring along with you and still keep camping and refuge apart from each other. We got pretty good at it before we got into real size camping using the Montero, but we've since been spoiled by it. Such was the struggle in packing the Blackbird for an overnighter to Boulder Mountain in Highway 12. 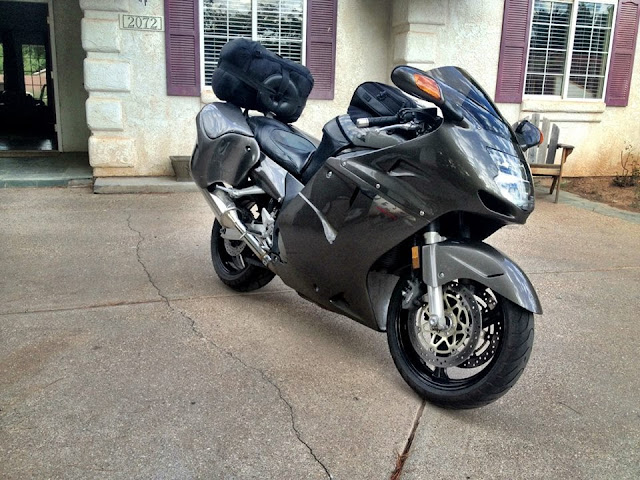 Seen here moments before departing is the result of forced perspective. Packed therein is a Kelty three-person tent, two Nebo down sleeping bags, two Pedex down inflatable sleeping pads, a JetBoil with fuel, another camp stove plus mess kit to cover two for dining, two meals each for breakfast and dinner,  clothes for another day plus the unmentionables, toiletries and the standard riding fare of a tool and first aid kit. We were set.

The Bird has been on the fritz most of the Summer with a burned out stator. With my attention turned to the Montero I didn't pay the Bird its due in getting it repaired and running, only replacing the stator a few days before we took off on this trip.

All the clever packing and forced perspective would be for naught, since in my oversight I didn't realize that the regulator/rectifier was taken out when the stator went pear-shaped, so even though the Bird had the means to charge its battery, the juice wasn't flowing to it. I became suspicious of this when I killed the engine on a start at Mount Carmel Junction and she barely had enough cranking amps to turn over.

Heading north on Highway 89 to 12 I checked the brightness of my signal indicators and they were dimming. Just before the turn off to Highway 12 the speedometer died but the engine kept running. Mindy motioned for a break and we pulled into the first gas station where I confirmed my fears. The battery wasn't charging and the Bird was dead. We wouldn't make Boulder. Plan B.

About eight miles away up Highway 89 is Panguitch, our new forced perspective. It's a place we'd spent an enjoyable time just a couple of weeks previous for a cycling race and I figured the town to be large enough for an auto parts store and/or a mechanic. We got the Bird started with a robust push from Mindy and made our way back to 89 and into Panguitch where we parked on a hill just outside of their senior center to hit their NAPA Auto Parts store for either a new battery or a charger.

The sign outside the store said "Back at 12:30" and it was going on 12:25. Another patron was waiting as well and after a bit of conversation about our plight, turns out he's a mechanic and has a garage and better, a charger and he'd be glad to let me charge my battery on it overnight, enough to get us home the next day. I owe Steve-o.

Got the Bird started again rolling downhill and limped her to S&S Automotive, Steve-o's shop, where he got us hooked up, literally. 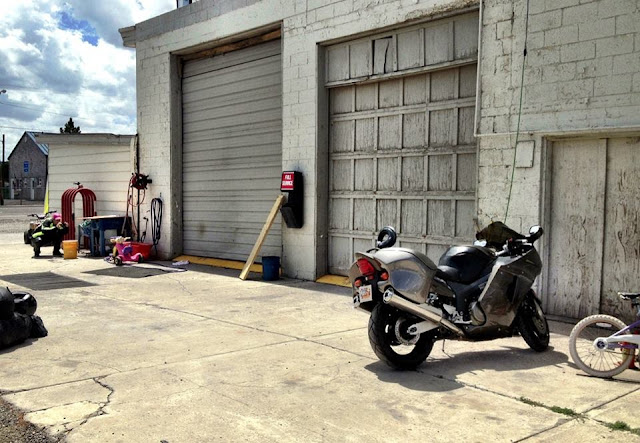 I had a tough time leaving the Bird there all by herself. Mindy kept saying that we could pitch the tent there and spend the night if that would make me feel better. There's only one thing better than the freedom of adventure and that's having a good sport along for the ride.

I tore myself away and we sought out something for lunch and ended up at the C-Store Artisan Pizza and Spaghetti Cafe. We made some calls and through the recommendations of other no-vacancy proprietors found the second to last room available in Panguitch. And then the pizza came and suddenly things were looking up. 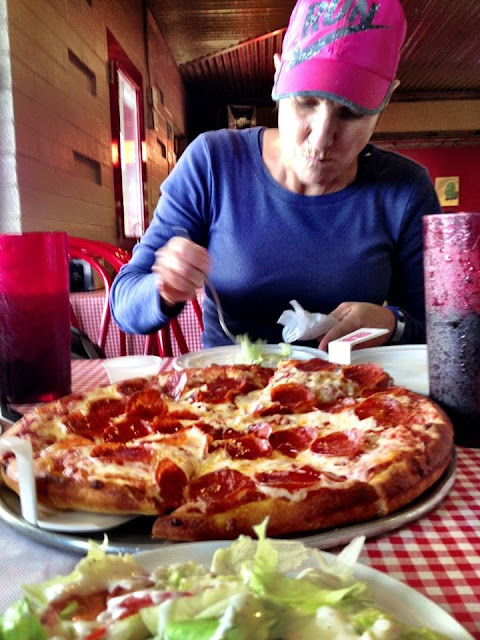 Bread twists slathered in butter, home made blue cheese dressing and deep dish pepperoni should've killed us if not made anything else not really matter at the time. Delicious.

The room we booked was around the corner on Main a block north, Church's Blue Pine Motel. 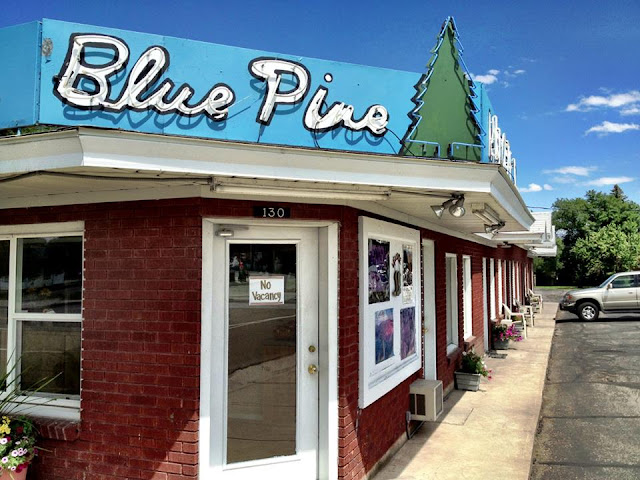 We killed the afternoon across the street at the Gem Theater watching the sequel to Despicable Me. The theater was great, the movie, meh.

Early by Panguitch Standard Sunday Time standards I walked back to S&S clad in riding gear and toting my helmet. The Bird was fine, the battery charged. I installed it and the CBR 1100XX roared to life and woke up a few chickens.

We figured the shortest route back to St. George was by Panguitch Lake, over Cedar Mountain and on to I-15. We stopped for a pic or two. 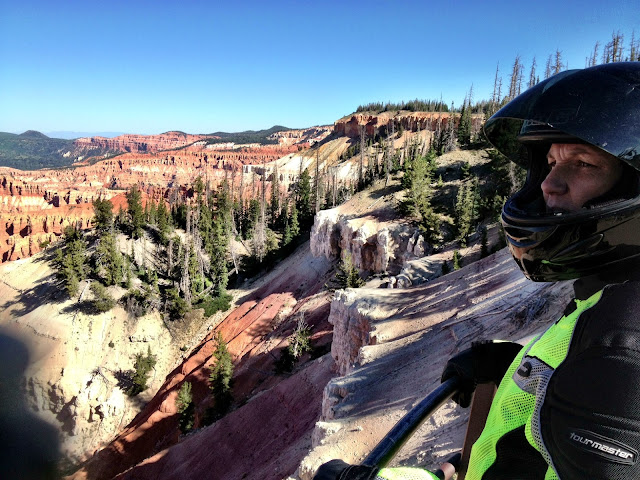 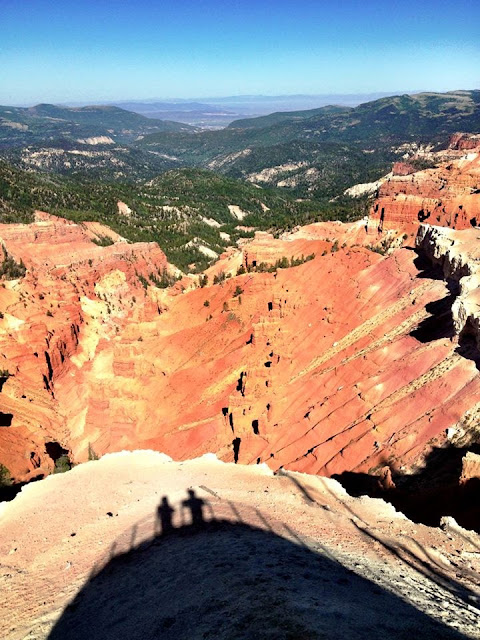 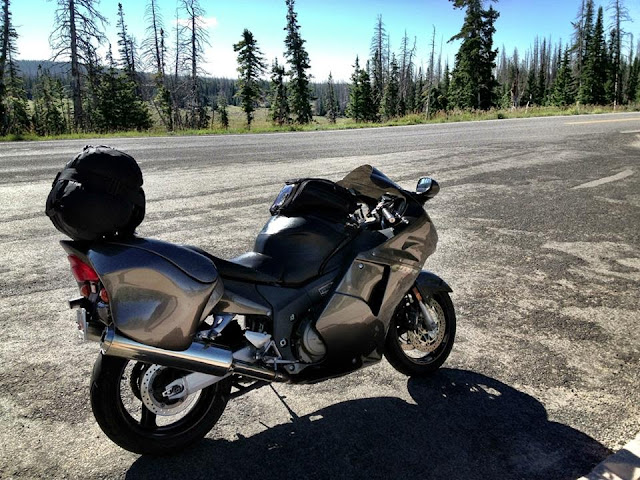 On I-15 just outside of Cedar City the speedometer stopped working again, and then the tach died as well making me hyper-aware should spark cease to happen in the combustion chambers and bring us to a halt on the freeway. But it didn't. We made it all the way home to our garage door where upon coming to a stop the Bird gave up the ghost of a non-charginging electrical system.