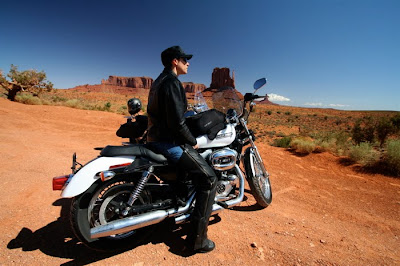 We'll stick with white. After much deliberation and a few miles the decision has been made to keep the Sportster. That's a good thing, too, since most of my favorite photographs contain that machine and her rider. Turns out, I'm more sentimental about it than she is. So she says.

And while Honda, Suzuki and Yamaha have in earnest emulated the Sporty with arguably more dependable and more comfortable offerings, as the song goes, "Ain't nothin' like the real thing, Baby." I like that it's an original, the bike that saved Harley-Davidson.

The problem is I don't like Harley-Davidson. Their "Screw It, Let's Ride" campaign bespeaks an attitude seemingly inherent to anyone who throws a leg over one. More recently there's an undertone in their marketing that's bothersome; "It's a free country, but have you felt like that lately?"

Reminds me of a couple of bumper stickers (dozens actually) floating around town. One says, "Miss it yet?" with an image of the Constitution next to the phrase. The other claims, "Legalize the Constitution!" Now, I follow things pretty closely, especially the Hill and the pundits (except Fox, thank you very much). And I have yet to see any legislation that impinges on any constitutionally guaranteed rights. I can't say that about the previous administration and the Homeland Security Act.

You know, every time I see that Sporty rolling on this nation's roads commandeered by one as sweet and lovely as its rider, I feel like it's a free country, because it is, damn it. I don't like the fact that an American manufacturer with a culture as ubiquitous and worldwide Coca-Cola is capitalizing on the idea that due to its current administration somehow this country has gone to hell. It hasn't. In fact, there may be a silent few, perhaps even a majority out there who feel it just got better.

Capitalizing on that automatic attitudinal response of their constituents and wannabes who are perhaps a wee bit less educated on what certain reforms really mean smacks of ethnocentrism. Maybe even racism. You can't tell me that people aren't looking for an excuse to dis the man. In my opinion it is unpatriotic and polarizing in a critical time when this country needs to get its shit together.