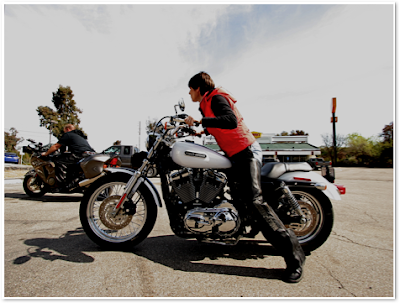 I’ve been known to bad mouth Harleys, more so Harley riders. There’s an etiquette on the road amongst motorcyclists, a wave exchanged between passing riders. Between bullet or sport bikes it’s a two-finger down salute meaning to keep both tires down. Between cruisers it’s a wrist flick out opening the palm of the hand. Everybody waves at everybody, except Harley riders, especially the hard-core, Glide, Fat-Boy, Road King-riders, they’ll snub me every time when I’m waving from the Blackbird.

Mindy’s noticed this too and our observations had lead us to a general disdain of all things Harley, until last weekend. We were on the ‘Bird riding to Kolob to see Fall’s touches on this fantastic place, and along the way we stopped at the Harley-Davidson store near Coral Canyon to look at a cross-over Buell. Parked next to the Buell was the Sportster you see above. Mindy’s been trying on bikes, Honda Shadows mostly and hadn’t found the fit she was after. She threw her leg over this ride and grabbed the handlebars. “This is it,” she said.

It couldn’t be. We bleed red, not orange. We like keeping our fillings in our teeth, the deceptively quiet whisper of 168 horses, cold starts, the reliability of Japanese engineering, standing out in a crowd - and pulling away from it. None of our riding gear has a manufacturer’s logo on it, nor do our coffee mugs, toothbrushes, swizzle sticks, shot glasses, coasters, briefs, wristwatches or bandannas.

Until now. We took delivery of the Pearl White HD Sportster 1200L the following Monday. Mindy also picked out a new HD jacket, chaps, a down vest and riding gloves. She asked the clerk if there was anything there without the HD logo on it. Silly question.

I rode the bike home from the dealer and as I was mounting the bike one of the mechanics who was helping us get acquainted with the Sportster asked me what color my Harley was. “I don’t ride a Harley,” I said, “I ride a Honda.” The expression left his face and he turned and walked away.

Now we confuse everyone. No one knows how to wave at us, this mixed-marriage between metric and standard. But we wave, ‘cause it’s not the brand, it’s the bike. Kind of like people.

And I have to say there’s something to a brappling V-Twin, low slung, belt-driven classic American motorcycle. Thousands of dentists, attorneys, plastic surgeons and veterans can’t be wrong.